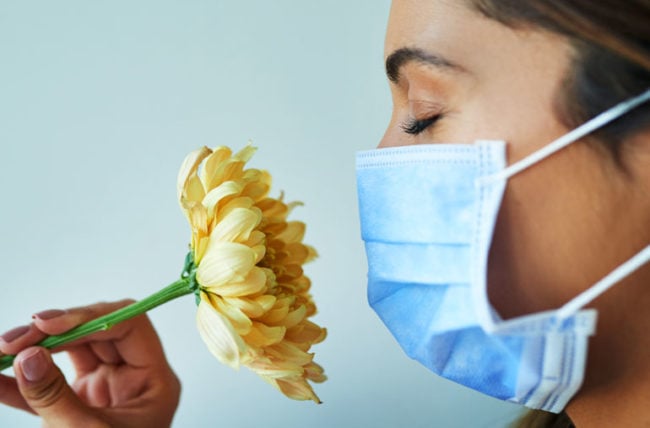 Think about all of the smells that you experience every day, from the sweet aromas of fresh baked goods to the earthy scents of nature on a hike, and how they affect your interaction with the world and even your emotions.

Certain smells may take you back to memories while others warn you that something unpleasant is nearby. These smells inform you about the world that surrounds you.

Now imagine inhaling through your nose and experiencing nothing at all, just air. A world without any smells.

That’s the life of those who experience anosmia, the absence of the sense of smell. Whether from birth or developed later in life, the absence of smell has never gotten much attention — at least until the onset of the COVID-19 pandemic.

Loss of smell is one of the most common side effects of COVID-19. While most COVID-19 infected patients eventually recover their sense of smell, there are those who have yet to have it return. For an unfortunate few, it turns out that their all-important sense of smell may never return.

To better understand anosmia — including its causes, treatments and relationship to COVID-19 — we spoke to otolaryngologist Raj Sindwani, MD.

The loss of smell

There are a few different levels of smell loss, according to Dr. Sindwani. Anosmia is the medical term for a complete absence of smell while hyposmia refers to a partial loss of smell. There are also a number of other olfactory disturbances, including phantosmia which involves smelling things that aren’t actually present.

According to the National Institute of Health (NIH), only one to 2 % of North Americans report problems with their sense of smell. But issues increase with age and men are more likely to experience it than women. The NIH cites a study that shows nearly a quarter of men in their 60s experience a disorder while only 11% of women in their 60s have reported issues.

The downsides of loss of smell

Loss of smell comes with several downsides that go beyond simply not being able to inhale a sweet whiff of cookies.

First are safety issues. “There’s a pragmatic safety consideration,” Dr. Sindwani says. “Without the ability to smell, you lose the ability to detect dangerous smells like gas or fire and smoke.” You also run the risk, he notes, of not smelling the rot in spoiled food and drinks (like milk) that can lead to unpleasant and potentially dangerous consumption.

As a result, he adds, you’ll want to be more vigilant about things like smoke detectors in your home and making sure food is still fresh.

But that’s not the only downside. “A much broader impact is the human and emotional effect a loss of smell has,” says Dr. Sindwani. “Smell and taste go hand in hand, and there’s this complex interaction between experience, emotion, memory, smell and taste.”

As a result of a disruption in that connection between emotional memory, experience and smell, some patients can develop anxiety and even depression.

“Food doesn’t taste good anymore, wine doesn’t carry the same flavor and it isn’t pleasurable to drink anymore,” says Dr. Sindwani. “People then just don’t get the same enjoyment out of that dining experience, and eating and drinking become about mere sustenance — not about enjoyment and enhancing one’s life”

One of the leading causes of an acquired loss of smell, Dr. Sindwani says, is head trauma. “Frontal trauma or head trauma, the kind that can jolt your brain inside your head, can cause a traumatic or shear injury that can result in damage to the olfactory nerves,” he points out.

Viruses are common causes, too, from the common cold to, yes, COVID-19. Dr. Sindwani says, “There’s a risk of temporary and, less commonly, permanent loss of smell with any viral infection.”

Short-term loss of smell in this setting is usually from congestion or inflammation in the nose. “Things get swollen and the odors just are not getting to the smell receptors that live high in the nose,” he says. “It happens with the common cold and it frequently happens early in COVID-19 cases as well.”

With longer-term cases, that stretch on for months or even permanently, he says the issue may be damage to the smell receptors or olfactory nerves themselves. “That’s what we think when we look at a CT scan or an MRI and don’t see any physical signs of congestion or appreciable physical change,” he says. “We can’t see the damage on those images, that inability to receive those smells.”

There are a host of other causes of poor smell, he says, including:

Many cases, he adds, are idiopathic, meaning there’s no clear, explainable cause. “Anything that blocks the nasal cavity to the roof of the nose where the smell receptors are can diminish your ability to smell, anything that disrupts the ability of that nerve to sense smell can also be to blame,” he explains.

When a patient first comes to a specialist with smell loss issues, Dr. Sindwani explains, “We look at the patient’s history and see if there’s been anything to cause that issue such as head trauma, like a car accident or nasal surgery. We also look for polyps in the nasal cavity by putting a skinny telescope (called an endoscope) up someone’s nose.”

Ultimately, if there’s nothing they can find that directly explains it, he says, than it gets put under that “idiopathic” (or unknown) category.

Objective smell tests can reveal that a patient’s subjective smell loss isn’t as severe as the patient thinks it might be (or vice versa).

As for viral causes, the loss of smell has become one of the predominant symptoms of positive COVID-19 cases. Why, exactly, isn’t known; like everything else with COVID-19, it’s new. “We just have the current data to go on,” Dr. Sindwani says, “and we know it’s happened before from viral infections.”

But, for long-term smell loss, that number is actually much smaller. “One study used objective smell testing and found that only 15% of COVID-19 patients experience a loss of smell for more than 60 days and less than 5% experienced it for longer than six months. That’s is really comforting news,” Dr. Sindwani notes.

One more potential wrinkle that deserves more research, he says, is the previously mentioned study which also posited that COVID-19 patients who lose their sense of smell have milder cases than those that don’t. “It was based on retrospective data, but patients who maintained normal smell function were more likely to have a more severe course of the disease, including being more likely to be hospitalized and even intubated,” he says.

What should you do if you lose your sense of smell?

If your loss of smell isn’t attached to an obvious illness — a cold, sinus congestion, or even COVID-19 – then you should definitely check with your health care provider, Dr. Sindwani notes.

This situation, like so many others, is further complicated by the COVID-19 pandemic, though. “If you have other COVID-19 symptoms, you should follow COVID-19 guidelines and get tested.”

But, he adds, if it’s the only symptom you have, make that appointment and be sure to make follow-ups to track the progress. “If it’s COVID-19-related or related to another viral infection, it generally resolves itself within a few weeks. It’s after it’s been going on for longer than that we get more concerned,” he says.

Can it be treated?

If you lose your sense of smell, chances are you’re going to want it back. And that leads to the question of treatment. “We treat what we know at first,” says Dr. Sindwani. “If it’s a polyp or a tumor, those have their own specific treatments. The loss of smell is actually a symptom of the problem.”

Nasal polyps and chronic sinusitis (recurrent or persistent sinus infections) are the most common problems, he says, noting there are treatment options, including surgery, for those issues. Whether it’s medication or surgery, there are options.

With post-viral issues – as well as with other occurrences caused by aging, Parkinson’s, trauma and, occasionally, congenital cases – Dr. Sindwani says that steroids, either by mouth or nasal steroids, can also work.

“Data is lacking on this, but the thought is that these steroids can reduce inflammation in parts of the nasal cavity or in these smell receptors which are inflamed,” he says.

He also notes that, while there’s still plenty of research left to do on anosmia treatment, there’s been recent interest in how consuming omega-3 fatty acids and other supplements could help your sense of smell recover.

But what if you could train yourself to smell again? That’s the thinking behind olfactory training. “The idea is that it’s an extremely safe, self-driven treatment option with no side effects that’s been helpful, including in post-viral cases of smell loss,” Dr. Sindwani says.

“It utilizes what’s called the odor prism,” he continues. “It uses primary odors to retrain the nose, relying on memory and experience, to train those nerves to come back to life.”

Just as there are primary colors (red, blue and yellow), there are thought to be primary smells and each has a corresponding example that is typically used to represent it: flowery (rose), fruity (lemon), aromatic (cloves or lavender) and resinous (eucalyptus).

“With these four primary smells, we ask the patient to take each smell, usually in the form of an oil or scent stick, put it under their nose and deeply inhale that scent for 15-to-20 seconds,” Dr. Sindwani explains. “And while you’re inhaling, you intentionally try to think about and remember what roses smell like and even look like. You want to mentally immerse yourself in the thought, picture the roses and what they would smell like.”

The idea, he says, is that you’re combining that visual imagery with the stimulation of an isolated scent to retrain your nose on how to smell.

After going through the process with that flowery scent, you repeat the same steps with the other three scents. “Again, you’re trying to conjure up what that object looked like and smelled like to retrain those smell receptors back into working,” he adds.

The exercise is repeated two-to-three times a day for a while and, he says, it’s possible to get a sustained improvement in your sense of smell at three months, six months and even up to a year. In some situations, steroid sprays might be used, too, to cause an even better improvement.

Do All People React to the Coronavirus the Same Way?

How to Gain Weight Safely

What’s That Smell? What You Need to Know About Hyperosmia

What Ambiguous Loss Is and How To Deal With It 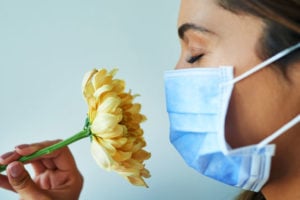 If you lose your sense of smell, it could be a symptom of several things, including COVID-19. Our expert weighs in.