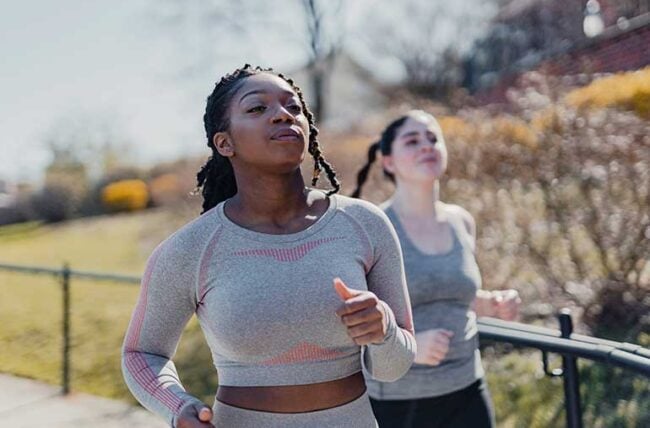 You’re midway through a run when an itchy feeling hits your legs. It’s barely noticeable at first. Then it gets a bit worse … and then a little uncomfortable … and then climbs to PLEASE MAKE IT STOP levels.

Within minutes, scratched-up thighs can replace a runner’s high as you claw at your legs in search of relief.

This sensation is known as runner’s itch ­— and it’s actually pretty common for beginning runners or those restarting their training after taking time off. So, what causes this temporary misery? Exercise physiologist Katie Lawton, MEd, has your answer.

What is runner’s itch?

The name of this condition is a near-perfect match for what it is. Basically, runner’s itch refers to a prickly feeling that develops on your skin during exercise. “It’s exactly what it sounds like,” says Lawton.

The itchiness typically hits your legs or stomach — and it can be intense enough to stop you in your tracks to start scratching.

The good news? The condition isn’t a cause for major concern. Better yet, runner’s itch is temporary and typically subsides soon after the workout. “It’s not something that usually hangs around,” notes Lawton.

It’s also not something guaranteed to hit every new runner or workout warrior.

One last thing, too: This aggravating itchiness doesn’t only pain runners. It can flare up during any cardio activity that elevates your heart rate and gets your blood pumping. (More on that in a moment.)

Itchy skin (and the urge to scratch it) tops the list of symptoms. Your skin also may become:

It’s time to talk about blood flow, the force that flips the itch switch. Here’s how it happens.

As you start running or doing a cardio workout, your heart kicks into a higher gear to deliver blood and oxygen to your muscles. This rush of blood fills the hair-thin blood vessels called capillaries that connect arteries and veins.

As those capillaries expand, they can bump against nearby nerve endings. That stimulation of nerve cells is enough to launch an itchy-itchy feeling.

If you’re new to running or returning to it, that capillary expansion can really set things off.

“It can be part of your body’s vascular response to a change in activity,” explains Lawton. “If you’re going from a more sedentary lifestyle to suddenly running a bunch of miles, there’s a chance you experience runner’s itch.”

There’s also research that suggests your body may release histamine during exercise to fight fatigue, which could also cause blood vessels to expand. (Histamine, of course, is typically used if your body senses a threat from an allergen. Insert your allergic-to-running joke here.)

Can runner’s itch be stopped?

Let’s look at this in two ways — immediate and long term.

That itchy feeling should stop with your workout as your heart rate slows, blood flow lessens and those expanded capillaries shrink a bit, says Lawton.

If the itchiness lingers, though, try:

If you condition your body to handle that cardio-induced blood flow, you’re less apt to experience runner’s itch. Slowly working your way into a running program may help keep the itching at bay.

“Consider the itching a signal from your body that you may be overdoing it, then adjust accordingly,” suggests Lawton.

And once you establish a running routine, keep with it. Logging consistent miles helps your body become better equipped to handle increased blood flow demands without triggering an itchy response.

An itch while running doesn’t have to be runner’s itch, of course. Trotting for many miles at a time while pouring out sweat brings all sorts of skin complications. “Chafing and irritated skin are very real things for runners,” says Lawton.

So, before you automatically assume you have a case of runner’s itch, consider these four factors, too:

What if the itch continues?

A basic case of runner’s itch typically resolves itself. But if the symptoms continue or worsen over time, it’s worth talking about with a healthcare provider.

And reach out to a doctor if your itchiness is joined by dizziness or breathing issues.

“If the itching or rash doesn’t seem temporary, see someone about it,” states Lawton. “And if you’re noticing symptoms that seem to go beyond runner’s itch, it’s worth going in to get checked.”

Can Skin Cancer Make You Itch?

What You Need to Know About Aging Skin

The Truth About Itchy Ears: You May Be Causing the Problem

Why Am I Breaking Out in Hives When I’m Stressed?!

Why You Shouldn’t Ignore a Wound That Won’t Heal 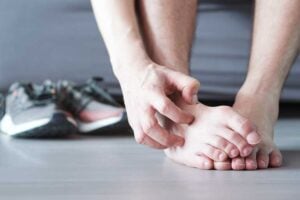 Runner’s Itch: Why You Might Itch When You Run

Resist the urge to scratch, and learn why new runners often experience the common phenomenon of runner’s itch.