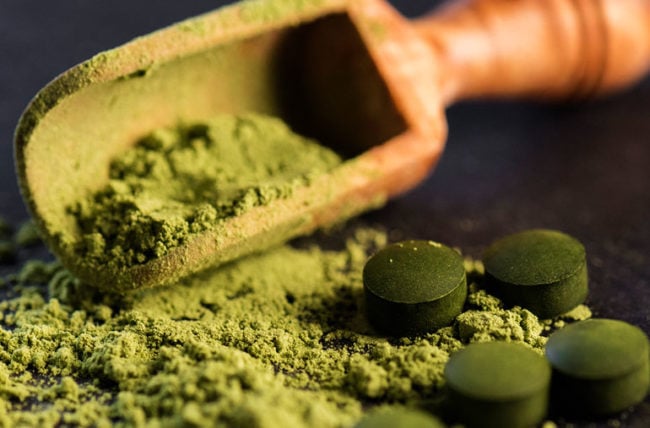 What’s green, tastes like the ocean and is absolutely packed with the potential to keep your body running at top-notch?

If you were thinking seaweed or sea moss, you’re on the right track. Another superfood straight out of the water is gaining a lot of attention lately — and its health benefits are really turning heads.

The algae spirulina has been lauded for centuries for its high nutritional value, being called, among other things, one of the “most nutrient-dense foods.” Believed to have first been used in ancient Aztec civilizations, spirulina has more recently been used as a dietary supplement for NASA astronauts on space missions.

“Spirulina is considered one of the oldest plants on Earth,” says registered dietitian Beth Czerwony, RD. “It’s been used in people for a very long time and has been shown to have some very exciting health benefits.”

But even with all its promise, spirulina may not be a good choice for everyone and shouldn’t be taken in high doses.

Czerwony breaks down the various health benefits of spirulina and whether you might want to consider adding it to your vitamin regimen.

Spirulina comes from a blue-green algae plant found in oceans and salty lakes. It’s typically sold as a powder or as a tablet supplement and is rich with good-for-you nutrients, like:

The United States Food and Drug Administration (FDA) doesn’t approve supplements. But it does regard spirulina as “generally recognized as safe” and approves the use of spirulina as a colorant and to be used in foods like cereals and beverage mixes.

What are the health benefits of spirulina?

There is a growing body of research supporting spirulina’s positive effects on people. Even more benefits have been shown in animal models that may translate to humans. Czerwony says the evidence thus far points to several reasons to be excited about the health benefits of spirulina.

People are always raving about the antioxidant effects of blueberries, avocados, salmon and more. You can add spirulina to that list.

“Antioxidants have this wonderful ability to go in and beat up on free radicals, which are essentially poisons that we come in contact with in our everyday lives,” Czerwony explains. “Antioxidants reduce inflammation in our bodies, which can decrease the chances of a whole host of diseases.”

Chronic inflammation has been linked to a range of diseases, including

Spirulina’s antioxidative properties are among the reasons it’s used by astronauts. (Interestingly, inflammation has been shown to be a major health risk of space life.)

2. It may help reduce cancerous tumors

At least one scientific study showed that spirulina can be used to shrink tumors in people living with oral cancer. In that study, just one gram of spirulina per day for a year reduced cancerous tumors in 45% of research participants.

“It’s very promising that potentially this could be something we could recommend in the future,” Czerwony says. “When you see this evidence that spirulina may actually be killing cancer cells, I would think that one day there could be a very useful place for spirulina as a preventative measure against cancer as well.”

3. It’s good for your heart

Spirulina’s anti-inflammatory properties have been shown to have some impressive benefits for your heart. One study showed that people with heart disease who took spirulina showed improvements in blood cholesterol and triglycerides. They had lower LDL (“bad”) cholesterol and higher HDL (“good”) cholesterol.

“When we think about anti-inflammatory foods, we’re always thinking about heart health because we know that inflammation can lead to plaque formation and hardening of the arteries,” Czerwony says. “So, if you already have high cholesterol, there’s some promise that spirulina is going to help. It could also potentially be used proactively if you’re at risk for heart disease.”

4. It could help relieve your seasonal allergies

For people who are allergic to pollen, ragweed, animals and more, research has shown that regular use of spirulina may help relieve your runny nose.

“This is a really interesting finding because seasonal allergies are quite common, and some people don’t tolerate allergy medications well or would just prefer a more holistic option to control their symptoms,” Czerwony notes.

5. It can improve dental health

Spirulina is antimicrobial and antibacterial (meaning it can kill off — or at least stop the growth of — bacteria and other invaders). One study put its germ-killing power to the test with spirulina-laced mouthwash. Results showed people who swished with spirulina showed “significant reduction in dental plaque and gingivitis (gum disease).”

For all its promising effects, spirulina may not be a good choice for everyone, Czerwony cautions. You should talk with a healthcare provider, like your general practitioner or a nutritionist, before taking spirulina.

That’s because there are some people who should avoid spirulina or at least be wary of it. That includes people who:

How to add spirulina to your diet

If you’re looking to add spirulina to your life, you’ll want to go easy on it. After all, too much of a good thing can be … well, too much. It’s recommended to take no more than 8 grams of spirulina per day — that’s a little more than two teaspoons.

Spirulina powder can be added to your favorite smoothie, or try sprinkling it in your guacamole, hummus or pesto.

Some people are put off by the taste of spirulina, though, even in small amounts. Remember, it’s a sea plant, so the taste can be described as earthy or fishy, which may not be for everyone.

If the taste of spirulina isn’t your jam, Czerwony suggests talking with a healthcare provider about over-the-counter spirulina supplements instead.

“Whole foods are always the preferred source of nutrients,” Czerwony says. “But if you can’t tolerate the taste of it, the capsule form is a good alternative.”

7 Pointers for Living Well With Lupus 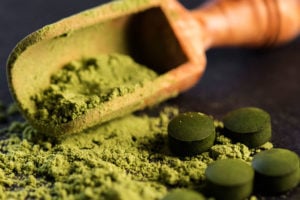 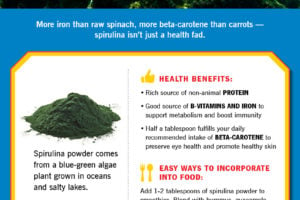 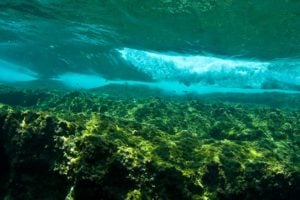 Spirulina has been used for centuries, from ancient Aztecs to — recently — astronauts in space. Learn more about if this superfood is right for you and how to get it into your diet.