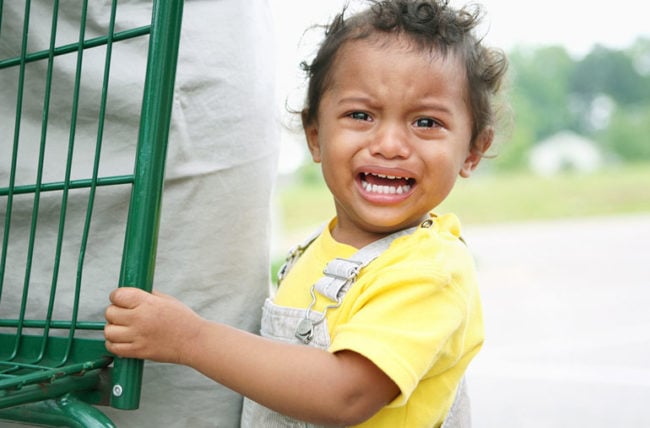 Have you had to console your 2-year-old angel because they’re flipping out in the middle of the grocery store — again? How about when your 3-year-old starts having a meltdown at a birthday party because they see another kid opening presents and not them?

Some of us have to deal with toddler tantrums more often than we want. Temper tantrums are common between ages 1 and about 3 or 4, and while these temper tantrums are tough on the toddler, they can be tougher on mom and dad, says pediatrician Svetlana Pomeranets, MD.

While the phase won’t last forever, it sometimes can feel like it will never end. In the meantime, it’s a good idea to have some strategies for handling your toddler’s unruly behavior.

What happens during these toddler years?

For every child who seems to skip the meltdown stage altogether, there’s another whose phase seems to last for years. The toddler years are a time of rapid growth — physically, mentally and socially. During this time, most toddlers develop their sense of self and start to want to do things for themselves.

“When a toddler’s desire to do something doesn’t align with her ability, frustration is often the result,” says Dr. Pomeranets. “To further compound things, toddlers typically don’t have the language skills to ask for help if things don’t go smoothly.”

This gap between desire and ability can cause frustration, unruly behavior and tantrums.

Dr. Pomeranets offers tips to help you cope during these frustrating times.

1. Do notice the triggers

Do tantrums strike when your child is hungry, thirsty or just plain bored? Or very tired? Or not feeling well? Or perhaps you noticed an uptick in tantrums at a time of transition, like welcoming a new baby into the family.

“You can expect to see more tantrums in these situations, but anticipation and prevention can minimize them,” says Dr. Pomeranets.

Recognizing trigger situations will allow you to redirect your child with choices before the tantrum ensues. Talk to your child about potential triggers before entering a store, for example. Let your child know they’re not allowed to have a candy bar, but if they’re good at the store, then they can have a treat afterward.

In fact, it’s wise to allow toddlers to make small choices on a frequent basis.

Staying on schedule can be a lifesaver, especially when it comes to meals and naps. Plan outings at times when your child won’t be hungry and for longer trips, pack healthy snacks and drinks so your child has something to nibble on, if needed. Try to plan outings or errands around nap time when your child is less likely to feel irritable.

Sometimes, it all comes down to boredom. Have you noticed that your child is bored? Cure it by thinking of some out-of-the-box activities.

“Instead of harping on a child who is acting up out of boredom, try to come up with creative, socially acceptable ways to keep them occupied,” says Dr. Pomeranets.

If you can’t redirect a child before a tantrum begins, let it play out.

“Trying to address the trigger in the midst of a tantrum will only make it last longer,” says Dr. Pomeranets. “Offering choices or asking ‘Why are you acting this way?’ can make tantrums grow in intensity, like stoking the ashes of a smoldering fire.”

Attempting to discuss your child’s feelings in the heat of the moment may positively reinforce negative behavior. When your child misbehaves, it’s tempting to explain why the behavior isn’t OK. Instead of offering a lengthy explanation — which your child may struggle to understand — try to redirect your child either verbally or physically to help her focus on something else.

Talk to your child after the tantrum and when they’ve regained composure.

3. Do keep calm and carry on

Although it’s not easy, strive for patience during a tantrum.

“Offering a calming physical presence, without speaking, can go a long way,” says Dr. Pomeranets. “Gently putting your hand on the child’s shoulder or back can be very helpful.”

Of course, you can’t ignore throwing, kicking, hitting or unsafe behaviors. Make sure your child understands you won’t tolerate this behavior and what they’re doing hurts. But adult histrionics only add to the problem and yelling is as fruitless as talking.

“The goal is to ignore the behavior while providing safety,” says Dr. Pomeranets.

Consistency is key. At home, it’s best to let your child work through his tantrum. It can be embarrassing if your child has a meltdown in public and can make it harder for you to stay calm. If this happens, remove your child from the situation as quickly as possible. Take a deep breath, respond calmly and don’t give in to demands.

4. Don’t give in to stop a tantrum

It can be tempting to just give in and let your toddler have their way, especially if all you want is peace and quiet. Don’t cave in.

“You don’t want to give in just to make the tantrum stop,” says Dr. Pomeranets. “That sends the wrong message.”

If you give in when your child throws a tantrum about the candy/toy/whatever-they-want, it will only be harder next time. Head off tantrums over the long run by standing firm with your child.

“When you say ‘no,’ it should be absolute and not soft,” says Dr. Pomeranets. “Don’t change your mind once you’ve said no just to end the seemingly never-ending tantrum, either. This will signal to your toddler that they’ll get what they want.”

5. Do seek help for problem tantrums

Tantrums can last up to 15 minutes and may happen up to three times a day. Parents are the typical targets. The rest of the time, you can expect your toddler to act appropriately for their age, learning, speaking and interacting normally with other children.

The good news is that by age 4​, your child’s temper tantrums should markedly diminish.

“However, there are ‘normal tantrums’ and there are ‘problem tantrums,’” notes Dr. Pomeranets. “A toddler should not be attacking others or injuring himself severely during a tantrum.”

When misbehavior strikes, it’s helpful to remind yourself that you aren’t alone.

“Your child won’t still be going through this phase when they go off to college,” says Dr. Pomeranets. “If you’re concerned that your child may be having problem tantrums, ask your pediatrician for help. They will evaluate your child and offer guidance and support.”

Ways To Deal With Your Toddler’s Aggressive Behavior

Tips to Help You Survive Your Toddler’s ‘Terrible Twos’

5 Tips To Help Your Child With Back-to-School Anxiety

Help, My Kids Are Driving Me Crazy! 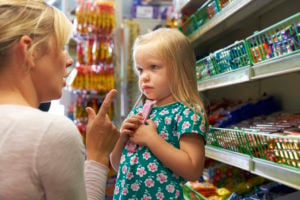 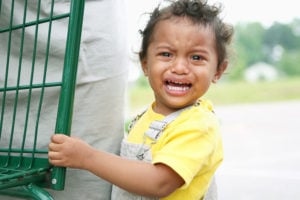 How do you react when your normally sweet toddler goes ballistic at his own birthday party? Tantrums are tough on toddlers but can be tougher on parents. Follow our pediatricians’ tips for restoring peace to your home.