A slew of supplements on the market claim to help reduce blood sugar levels and cut the risk of heart attack for people with diabetes. Garlic, magnesium and coenzyme Q10 are among the most common that people try.

But it may surprise you to know that an old favorite — cinnamon — is getting more attention, says dietitian Beth Czerwony, RD.

While results are still unclear, there have been some small studies about cinnamon and blood sugar that show promising results. However, to date, there isn’t strong enough evidence to recommend cinnamon to people with diabetes for medicinal purposes.

Here’s what we know

Cinnamon, a spice made from tree bark, is often touted for its potential medicinal properties. People have tried cinnamon to reduce inflammation, lower cholesterol and fight bacteria. For more than a decade, researchers have been working to understand if it can help people with diabetes.

Numerous studies have looked at this issue, and some have found no benefit at all from cinnamon. Other small studies have found that cinnamon can lower levels of glucose, cholesterol and triglycerides (fat in the blood).

Here’s a sampling of small studies that show a potential benefit for taking cinnamon:

In a small study in Diabetes Care, 30 people with type 2 diabetes were split into three groups taking 1 gram, 3 grams or 6 grams of cinnamon supplements daily. Thirty other people took a placebo.

This study in Nutrition Research analyzed 69 patients in China with type 2 diabetes. One group took 120 milligrams of cinnamon daily, another 360 milligrams and a third a placebo. After three months, the placebo group saw no change, while the two groups taking cinnamon had lowered A1C levels.

But researchers noted that applying these results to individuals is tricky. This is mainly because the amount and kind of cinnamon taken and use duration were different in each study.

One 2019 study reported that 3 to 6 grams of cinnamon consumption was found to positively affect certain blood parameters and is considered beneficial for people to consume cinnamon regularly.

To use or not to use?

Cinnamon may have some health benefits. However, the American Diabetes Association doesn’t recommend relying on cinnamon as a way to reduce blood glucose levels. Nor do we. Results from studies have been conflicting and there is not enough evidence to prove it works.

Because supplements aren’t regulated by the Food and Drug Administration, you don’t know the purity or exact content of them. Your best bet to stay healthy is to follow your diabetes food plan, get regular exercise and take your medication faithfully.

Use the real thing if you decide to spice it up

If you do want to add cinnamon to your diet, however, the best way to do it is to sprinkle it on your oatmeal or cook with about one-half teaspoon to one teaspoon daily.

Using cinnamon in its whole form in food, instead of in a tablet, is always best.

Want to Lower Your Risk of Heart Attack and Stroke? You Have More Power Than You May Think

How Zinc Benefits Your Body — and How Much Zinc You Need

Give Your Good Cholesterol a Boost 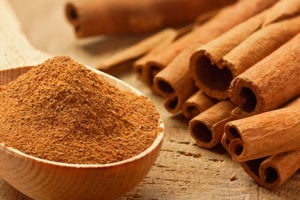 A slew of supplements on the market claim to help reduce blood sugar levels and heart attack risk for people with diabetes. But can cinnamon help improve your numbers?