But a darker side of TikTok exists, often times promoting dares or risky behavior. The latest challenge to hit the app has health experts and parents alike concerned.

Recently, the smartphone app has featured videos challenging users to take large amounts of an over-the-counter drug, diphenhydramine, aka Benadryl®, to cause hallucinations or induce an altered mental state.

Benadryl is an antihistamine most commonly used to treat seasonal allergies, but it can also lessen cold symptoms and reduce itching from bug bites, hives or rashes.

Pediatric emergency medicine specialist Purva Grover, MD, says the challenge is extremely dangerous and both teens and parents need to be aware of the risks.

The most common side effect of diphenhydramine, when taken correctly, is drowsiness. But taken in excessive amounts, risks can include:

But the most dangerous outcome? Death.

Large doses of Benadryl can cause high heart rates, which can trigger an arrhythmia, stroke, seizure or cardiac arrest. All of these conditions could result in permanent brain damage or induce a coma.

“An overdose can harm everyone differently,” Dr. Grover says. “You can’t pinpoint an outcome because everyone will respond differently, which makes this challenge so dangerous and risky.”

The Benadryl challenge isn’t the first time that a viral online dare has made headlines and raised concerned among the medical community. The Tide pod challenge and the cinnamon challenge were among the first fads to develop negative attention regarding unsafe behavior, filmed to fuel online popularity.

“It’s tricky because teens can get positive reinforcement with all the likes and views from the videos they post,” says Dr. Grover. “So the more risky or shocking, the greater the possibility that more people will see it.”

So what can parents do?

Dr. Grover says that discussing online videos or viral risky challenges needs to become part of the conversation you have with your children and teens. Just as you would discuss illegal drugs, vaping, sexting and safe sex, you’ll need to address what your kids are seeing online and on social media.

The more you talk about it, the more awareness it brings, she says. This challenge is particularly dangerous because it’s an OTC medication and it’s easy to obtain. Parents need to be aware of what their kids are being exposed to and what items they have in their home relating to it.

And it’s not just solely what kids see online – their friends, babysitters, older siblings, what they hear in school – can all have an impact on them. It comes down to talking with them to keep a pulse on what’s happening.

Teens Ignoring Coronavirus Warnings? Talk to Them With These Tips in Mind

How Can I Keep My Kids Motivated and On-Task While They’re Distance Learning? 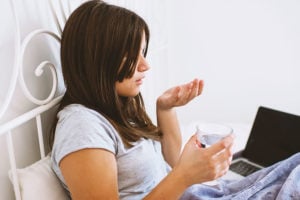 What Is the ‘Benadryl Challenge’ & Why Is It So Dangerous?

Online videos can fuel kids and teens to partake in risky behavior. Here’s what to know and how to talk to your kids.