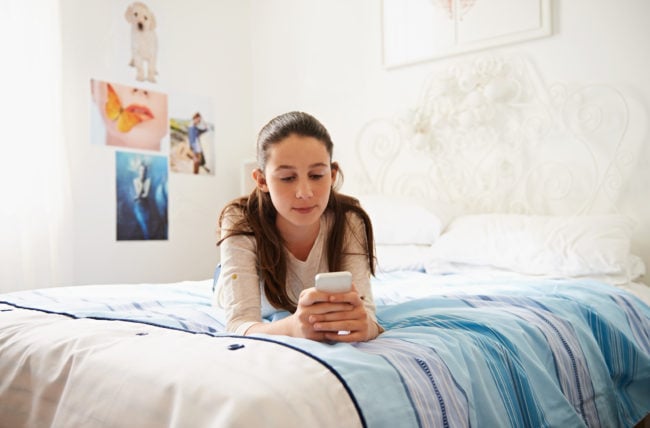 Researchers analyzed data from 39 previously published sexting studies with a total 110, 380 participants, who were between the ages of 11 and 17, with an average age of 15. They found that the prevalence of youth sexting was higher in the more recent studies.

Other results showed that one in seven teens, or 14.8 percent, reported they have sent sexts, and one in four, or 27.4 percent, say they have received sexts. The study also noted that sexting increased as teens got older.

Of particular concern, the researchers say, is that about 12 percent of sexts were forwarded without consent, which they called “troubling.” When sexting is coerced, or when sexts are shared without consent, it can lead to harassment by friends, cyberbullying or blackmailing.

While previous research has suggested that sexting is a predictor of sexual behavior and may be associated with other risky behaviors, the researchers theorize that youth sexting may be an emerging — and potentially normal — part of modern-day sexual behavior and development.

This study  is the first to look at how much sexting is going on, the researchers say, adding that more research is needed to identify who may be likely to sext without the other person’s consent, as well as whether educational campaigns and legal policies can lessen or eliminate nonconsensual sexting by youths.

Children today typically have a smartphone by the time they’re 10 years old, the researchers say. However, the study says, there is limited knowledge of sexting in youth younger than 12.

Tune in to your kids’ phone use

The study illustrates the need for parents to talk to their children about sexting early on, says child psychologist Kate Eshleman, PsyD. She did not take part in the study.

Parents looking to open the conversation should aim for a neutral tone by asking broad questions, Dr. Eshleman recommends.

Rather than banning sexting, discuss the possible consequences — like being unable to stop texts from being forwarded. You also can help your children by talking about strategies to resist pressure to do anything that makes them feel uncomfortable, she says.

It’s also important for parents to be in tune with the cell phone habits of their tweens and teens, Dr. Eshleman says.

“My advice for parents is to always be aware of what your kids are doing,” she says.

“As the kids get older they do require, and deserve, a certain level of privacy, but it’s always important for parents to be knowing what’s going on in their kid’s life, and the kind of information that they’re sharing with others.”

The study results appeared recently in the journal JAMA Pediatrics.

Are You a Good Sports Parent? These 5 Tips Can Help You

Sleep Disorders Affect Children Too: What You Can Do

Multitasking: Why It’s Bad for You and Your Kids

How to Guide Your Children Through the Minefield of Sexting