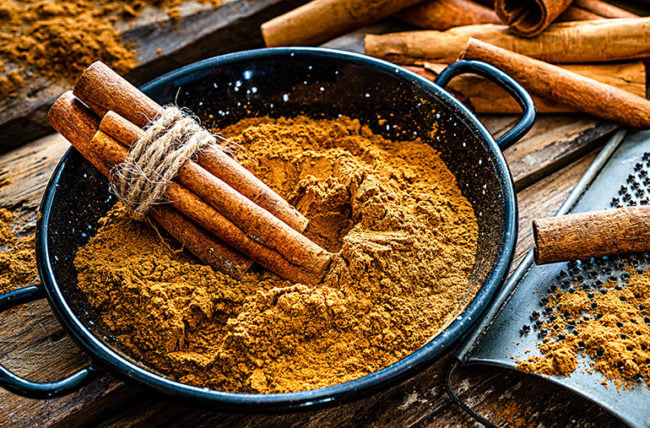 Around the holidays, there’s nothing like treating yourself and tucking into a spicy, sugary dessert. However, baking these sweet treats is often just as pleasurable — in many cases because they fill kitchens with the warm, welcoming smell of cinnamon.

In addition to helping desserts burst with flavor, the ancient spice is also used in savory dishes, such as baked cinnamon-thyme chicken or spicy lamb and veggie shepherd’s pie.

Some studies have also found that cinnamon can provide certain health benefits. Dietitian Candace O’Neill RD, LDN, shares why this versatile spice can boost the body — and some healthy ways to add cinnamon into your meal rotation.

Spices such as ginger are often touted for being tasty and healthy. Cinnamon, which is actually bark that comes from a tree, can also have some health benefits.

It has anti-inflammatory properties

Herbs and spices often contain antioxidants, powerful compounds that can reduce your risk of developing heart disease. In fact, O’Neill says cinnamon’s benefits are thought to be from one of its antioxidant compounds, cinnamaldehyde, which gives it that rich aroma and flavor and can also reduce inflammation.

Cinnamon is also a staple of the Mediterranean diet, a heart-healthy way of eating that emphasizes cooking with herbs and spices. “American food culture doesn’t have a lot of those spices naturally built into our diet,” O’Neill says. “Because we live in this fast-paced, on-the-go society, a lot of our food is packaged and pre-prepared. A lot of these potent antioxidants are lacking from our diet.”

For decades, scientists have been looking into whether cinnamon can help people with Type 2 diabetes reduce their blood sugar levels. One study found that people on insulin therapy who took cinnamon supplements daily saw marked (and enduring) decreases after a 40-day regimen. “When people stopped taking the cinnamon, they saw some continuation of benefits — namely, the blood sugar levels remained lower than at the start of the test,” O’Neill says.

However, cinnamon shouldn’t be seen as a replacement for more traditional treatment. In fact, the American Diabetes Association specifically states cinnamon “isn’t as effective as your Type 2 diabetes medication” and notes that supplements “do nothing to help people with Type 2 diabetes achieve treatment goals or provide a reliable drop in blood sugar.”

Participants in the same study above also had improved cholesterol and triglyceride levels in addition to lower blood sugar. A separate meta-analysis of 10 studies also found that daily cinnamon consumption led to a “statistically significant” decrease in total cholesterol, as well as LDL, or bad cholesterol.

However, because the amount of cinnamon in a dose varies — as does how long you take extra cinnamon — it’s not possible to say definitively that the spice can be used as a treatment to reduce high cholesterol.

What kinds of cinnamon can you buy?

When you’re looking for baking cinnamon, you’re most likely going to buy ground cinnamon found in your grocery store’s spice section. However, you can also buy cinnamon sticks or cinnamon tea, while cinnamon oil is also popular as a flavoring for candy or hard cider.

And while cinnamon is also available as an essential oil, it’s not recommended as a health booster, since most studies are done using dried cinnamon or supplements.

There are two common types of cinnamon:

Can cinnamon be harmful?

Cassia cinnamon has a compound, coumarin, that can be toxic if ingested in large amounts. “It can actually cause liver injury,” says O’Neill. Although it would be difficult to reach dangerous coumarin levels through baking with cinnamon, taking too much of a dietary supplement — for example, a concentrated cinnamon pill — could potentially be toxic. Plus, the amount of cinnamon in a pill doesn’t always match what’s touted on supplement labels. “This is why quality supplements are so important,” O’Neill says.

How to cook with cinnamon

Because cinnamon comes in so many forms, it’s frequently seen in sweet and savory dishes. For example, you can put a cinnamon stick as a garnish for warm apple cider to add flavor. A pinch of ground cinnamon on popcorn or other salty snack foods adds zing. And cinnamon and sugar also go hand-in-hand, meaning they’re perfect on toast, baked goods, and other desserts.

Other healthy recipes with cinnamon include:

If you’re not up for cooking an elaborate dinner, O’Neill says adding cinnamon to a smoothie, yogurt or oatmeal “can provide that delicious sweetness and really make a meal satisfying and flavorful” while potentially giving you health benefits.

“It’s a good addition to your diet, and it can really be a helpful way to cut back on your intake of added sugars,” she says. “You can use the sweetness it brings to a recipe to cut the bitterness — or just add a little something to a meal.”

Recipe Adventure: 10 Ways To Cook and Bake With Cinnamon

Is Spicy Food Good for You?

Cooking With Cumin: What You Should Know About This Versatile Spice 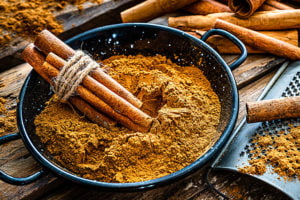 The Benefits of Cinnamon