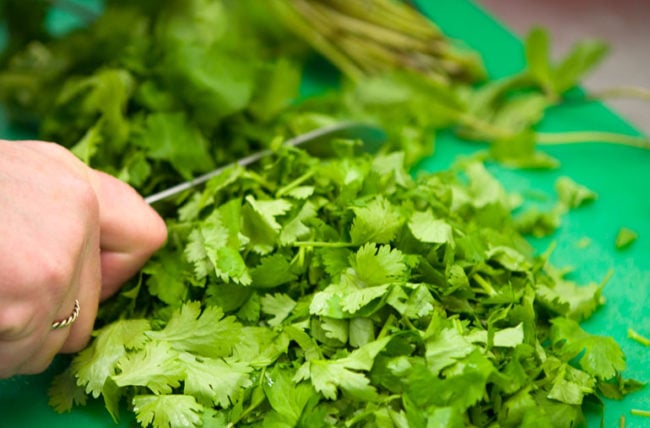 Who doesn’t love the smell of freshly cut herbs? They brighten up any recipe and add a fresh burst of flavor to even the simplest dish.

But there’s one aromatic leaf that can produce a distinctly negative reaction — coriandrum satvium — commonly known as cilantro.

According to family specialist Neha Vyas, MD, cilantro is one of the most polarizing herbs people use in modern cooking.

Around since the second millennium BCE, many cuisines use cilantro in all its forms — fruits, leaves and stems. From Roman to Chinese, Thai and Mexican to Indian cuisines, cilantro lovers everywhere know it’s a necessary ingredient to make meals pop. The seeds of the cilantro plant, for example, (also known as coriander) are a major ingredient in a variety of Indian dishes. And no Tex-Mex salsa is complete without the aromatic cilantro leaf in its mix.

But for some people the aroma and taste of cilantro elicits a very strong negative reaction. Some say cilantro tastes like soap. For others it’s dead bugs (yes, it’s been commonly described that way —  for real). So how can something so common in our kitchens be so divisive?

“It may surprise you to learn that those who dislike cilantro tend to have a gene that detects the aldehyde part of cilantro as a soapy smell and taste,” Dr. Vyas says.

Aldehydes are organic materials that possess a distinct chemical structure. The pairing of a carbon atom with an oxygen atom leaves room for two more bonds. If one of those bonds is with a hydrogen atom it’s called an aldehyde. If neither of the bonds is with hydrogen, it becomes a ketone.

The difference may be small at the molecular level, but has large implications at the olfactory (smell) level. It’s suspected that a dislike for cilantro is largely driven by the smell (and smell is directly linked to how we taste.)

“Think back to grade school science lab and formaldehyde and you can see why some people have such a negative reaction to aldehydes,” she says.

Blame it on your genes — and your surroundings

Some people possess a gene that makes them super-sensitive to the aldehyde component found in cilantro and other foods and products. One study noted a very specific genetic link near the olfactory center of DNA in about 10% of those with cilantro aversion.

But unlike other fixed genetic outcomes such as eye color or hair color, your cilantro preference can also be changed by environmental factors.

Your taste for cilantro can also change

Some suggest that crushing the cilantro leaves before using it diminishes the soapy characteristic.

And other positive influences can happen. Over time, as your brain processes new experiences with positive sensory exposures where cilantro is present, even the most extreme cilantro-phobes can be converted into liking it. For example, sharing a pleasant meal with family and friends can actually change your brain’s perception of certain foods like cilantro and allow you to update or change your former negative associations with it.

“One day, you might literally flip from not liking it at all to really loving it,” Dr. Vyas says.

Why you should love it

“Cilantro has many attributes which make it worthwhile to overcome any aversion to it,” Dr. Vyas says. Not only does it add a fresh, lemon-like, bright flavor to just about any dish, it also offers these health benefits:

So next time you’re meal planning, don’t forget to pick up some cilantro. In the course of time you just might love it — if you’re one of the lucky ones who can get past the soapy taste, that is.

Worry Much? 7 Tricks for Managing Anxiety

You Have COVID-19 — Now What Happens?

What to Do If Your Child Gets COVID-19 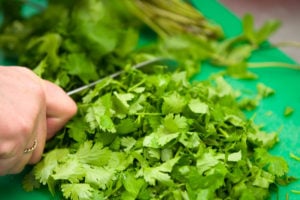 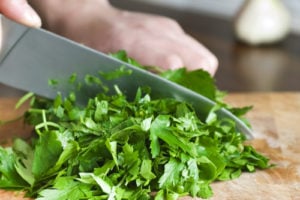 Love It or Hate It — The Great Cilantro Debate

Why do some love cilantro and some hate it? It may surprise you to learn that people who dislike cilantro tend to have a gene that detects the aldehyde part of cilantro as a soapy smell and taste, But whether you love it or hate it, cilantro has many health benefits.