You suspect your child is questioning their gender. You’re starting to pick up some clues, but what’s the next step? Should you approach your teen? Wait for them to come to you?

What is gender questioning?

When someone isn’t sure where they are on the spectrum of gender identity, they may be gender-questioning.

“A teen may feel like their body was formed in a way that doesn’t fit who they are,” says Dr. Cartaya. “They may be exploring whether they’re fully one gender or another, or if they’re somewhere in between genders.”

Many kids have known for a while that there is something different about them, she explains. They have done a lot of research and investigation to get a better sense of what they are feeling. “When they’re ready, most of them will come out to their caregiver if they feel comfortable and know they are supported,” she says.

While some parents and caregivers say they’ve suspected for a while that their child doesn’t conform to the gender they were assigned at birth, others are blindsided. “Others may realize, in hindsight, that there were clues along the way,” Dr. Cartaya says.

Terminology matters to gender-questioning teens — and that goes beyond pronouns and names. “It’s important to get the vernacular correct,” Dr. Cartaya says.

These terms help describe the scale of feminine to masculine:

When talking to your child about what gender interests them sexually, these terms are appropriate:

How do you create an environment where teens feel comfortable talking?

Subtleties, like using the right terminology, help your teen know you’re in their court. So avoid the temptation to ask the child outright, Dr. Cartaya advises.

Instead, create space for your child to bring it up when they are ready.

Here are some do’s for helping a teen have conversations about gender identity:

DO talk in generalities about gender and sexuality. “I often suggest using TV, film or news articles to initiate conversations,” Dr. Cartaya says. “You might say, ‘I think it’s great that different types of people are represented on the big screen,’ or ‘I just saw that so-and-so came out. If you or your sister ever questioned your gender or sexuality, I hope you would feel comfortable talking to me about it.’”

By talking positively about gender identity, your child will hear that you are supportive. They may be more inclined to speak to you when they are ready.

DO use trusted adults or friends to help you talk with your teen. Some kids may not come out to a caregiver if they are concerned they won’t be loved and supported. But they may come out to a friend or a trusted adult, like a teacher.

“If you hear from a teacher that your child is gender-questioning, let the teacher know you are open to having conversations with your child. Hopefully, they will encourage your child to talk to you,” says Dr. Cartaya. “A discreet approach to communicating with your child is acceptable and often effective.”

DO talk with a healthcare provider ahead of time. If your child’s behaviors concern you, consider talking with their provider before a scheduled appointment. Let the doctor know your child may be gender-questioning and that you’re willing and open to talking with your teen.

“This is also an effective strategy if you’re concerned your teen is experiencing depression or anxiety,” says Dr. Cartaya. “The provider can bring up the subject carefully and make a referral to a counselor if need be.”

Other clues your child may benefit from a doctor visit include:

DO use the right names and pronouns when your child comes out. When your teen confides in you, observe how they refer to themselves, and try to use that same language. They may prefer a different pronoun or an entirely different name. Using those terms demonstrates your support.

DO write your child a love note. Dr. Cartaya advises not mentioning anything about gender identity in the letter. Letting your child know you love them unconditionally gives them the green light to approach you when they are ready.

After all, who doesn’t enjoy a good love letter? “I highly recommend sending your child a note listing all their wonderful attributes and telling them you’ll love them forever, no matter what,” she says.

Parents, Could Your Teens Be Vaping? 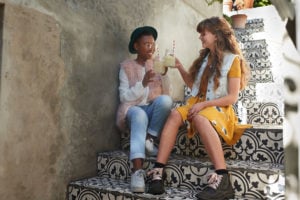