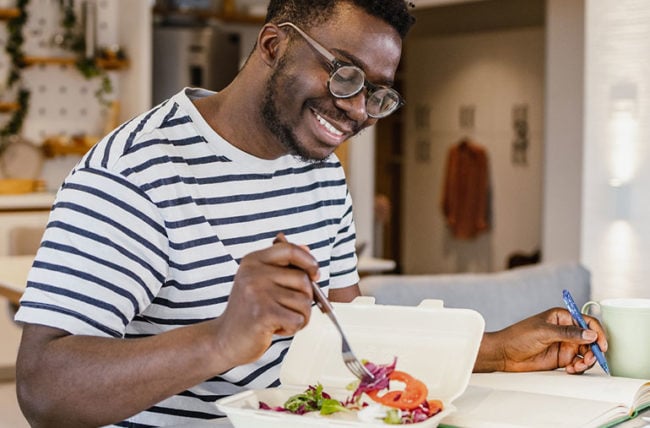 You probably already know that nibbling on carrots is healthier than diving into a bag of chips. And that what you eat affects your weight and energy levels. It’s also a factor in conditions like diabetes and heart disease. But is there a specific diet for ankylosing spondylitis (AS)?

“There’s no specific diet that can treat or cure AS,” says registered dietitian Joyce Prescott, RD. “But an overall, healthy diet of simply prepared whole foods may positively impact inflammatory conditions like AS.” This same meal plan may also support weight loss, which can decrease stress and pain on joints affected by AS.

Prescott shares more information on anti-inflammatory diets and what people with ankylosing spondylitis should strike from their grocery lists.

How does diet affect ankylosing spondylitis?

AS is an inflammatory disease — it triggers an immune response that causes swelling and irritation in your body. So, a diet that calms inflammation is ideal.

Research on diets that feature whole foods, like the Mediterranean diet, consistently indicates that the foods you eat can affect inflammation. “When people eat less empty calories from added sugars and animal fats and eat more nutrient-dense foods like fruits, vegetables, whole grains, lean meats and beans it increases their overall wellness,” says Prescott. “And it can support a variety of efforts to keep AS inflammation in check.”

There isn’t a lot of research on the best diet for people with AS. But what studies do show, says Prescott, is that it’s not about eating one or two specific foods. Your overall eating pattern is what’s most important. It’s up to you to figure out what diet works best for AS and your lifestyle.

Prescott’s tip: “The diet that works to reduce AS symptoms is one that gives you the results you’re looking for and that you can easily maintain.” When testing different dietary changes for AS, keep a food journal. Note your symptoms to see if the diet reduces any of the following:

People with AS often find the following diets helpful:

Healthcare providers usually recommend the Mediterranean diet as the most heart-healthy diet. Heart disease is a leading cause of death in the United States, and inflammation is a contributing factor. In one study of 7,000 people, those that ate a Mediterranean diet were 30% less likely to have a heart attack or stroke than people who ate a low-fat diet.

Another important study looked at the effect of the Mediterranean diet specifically on ankylosing spondylitis. It measured participants’ disease activity score (ASDAS), which indicates the severity of the condition. The results: People who swapped their usual foods for more foods in line with the Mediterranean diet saw positive improvement in their AS symptoms.

Although the diet is high in carbohydrates, Mediterranean diet foods come from nutrient-packed, complex carbohydrates like:

As people along the Mediterranean Sea have been eating this way for thousands of years — and living longer, healthier lives — there are lots of recipes to choose from. It’s easy to find resources and get started on the Mediterranean diet.

The paleo diet is a recently trending diet. It’s a throwback to eating the way people ate thousands of years ago during the Paleolithic age. This era was before farming, so people got their food by hunting and gathering. The diet consists of whole foods but eliminates:

According to Prescott, “There isn’t much research on how the paleo diet impacts those with AS.” But a large study of paleo and Mediterranean diets found that both effectively reduced inflammation. The traditional paleo diet is high in protein. But a new version for people who eat a vegan diet, called the pegan diet, offers a plant-based alternative.

The low-starch diet cuts back or eliminates starchy foods, a type of carbohydrate. This diet may be helpful because starch feeds a variety of natural bacteria in the gut, including a group called Klebsiella. The growth of Klebsiella triggers an immune response, which may cause inflammation.

The theory is that reducing starch in your diet changes your gut microbiome (the natural germs in your digestive system). One study found that the diet reduced AS symptoms and inflammation. However, this study only included a small number of people and the specifics of the low-starch diet in the study were not well defined.

Foods you should avoid on the low-starch diet include:

Gluten is a protein in some grains like wheat, rye and barley. For people with celiac disease, gluten causes severe inflammation and damage to their small intestines. But it may also trigger an immune response in people without the disease.

“We’re still learning how gluten can affect people. It seems to cause several digestive symptoms,” says Prescott. “Since both celiac disease and AS are immune disorders and people with AS often have gastrointestinal problems too, eliminating gluten may help.”

Drinking buttered coffee and eating mostly fat sounds strange. But the keto diet, where calories come primarily from fat, has rapidly gained a loyal following since its reboot. Researchers developed the keto diet in the 1920s to treat children with epilepsy. But in recent years, it’s surged in popularity because it switches your metabolism from using glucose (blood sugar) to burning fat for energy. On the keto diet, you also consume some protein. But you keep carbohydrates to a minimum.

Research indicates that the keto diet shows promise in reducing inflammation by stabilizing blood sugar and helping you lose weight. And while you eat a lot of fat on the keto diet, it doesn’t have to be a high-calorie diet, says Prescott. Some people following a keto diet overindulge in foods high in unhealthy saturated fat, like bacon and cheese. To keep the diet healthy:

Foods to avoid with ankylosing spondylitis

When you have AS, try to avoid foods that promote inflammation. The biggest culprits include:

Reducing added sugar in your diet is a healthy goal for most people, and that’s especially true if you have an inflammatory condition like AS. When you eat a high-sugar diet, you:

But lowering your sugar intake doesn’t have to be all or nothing, says Prescott. “For instance, if you eat a doughnut for breakfast every day, you may be able to improve your AS symptoms by reducing that to once a week. You don’t have to follow a specific diet. Even simple changes can make an impact.”

For example, both peanut butter and salami contain fat. But a peanut butter sandwich is better than a salami sandwich. Peanut butter — without added oils, sugar or salt — is a healthier choice. It has mostly unsaturated fat, plus it’s loaded with fiber, vitamins and minerals, notes Prescott.

Foods that come in packages and containers — that have been processed in some way — often contain high amounts of salt, sugar and fat. Typically, these ready-to-eat snacks and meals are high in refined carbohydrates and low in nutrients. And they may contain trans fats (modified fats) that increase cholesterol levels.

If you want to improve your health, stock your kitchen with fresh, whole foods such as:

Using diet to treat AS symptoms

Your diet can make a difference in how you feel overall and it may improve AS symptoms. When experimenting with various food changes, note how they affect you. “If the changes aren’t giving you the results you want, then some of the restrictions may not be worth it,” states Prescott. “Make the changes you can. If those changes help and you feel better, you’ll naturally want to stick with them.”

Nordic Diet: What Is It and What Can You Eat?

How To Cope With Rheumatoid Arthritis Pain

9 Ways to Prevent Disease (and To Live Your Healthiest Life) 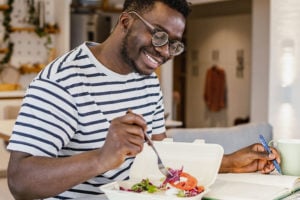 Changing your diet may help manage ankylosing spondylitis symptoms. Learn how diets like keto, paleo and low-starch affect AS and what foods to avoid.